If you like Japanese sentai superheroes like Kikaida™, Kamen Rider™, and The Power Rangers™ - you may enjoy this fun filled parody about the misadventures of Gordon Rider:  Hawaii's own superzero.  Like Gordon Rider on Facebook for updates. 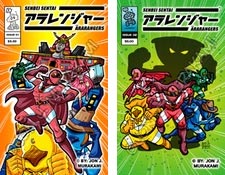 My parody of Go-Rangers™, The Power Rangers™ & Voltron™. A team of superheroes in costume with arare (Japanese rice crackers) as a theme. Silly, wacky & fun like most of my comics ^_^

You can get the many books Jon has illustrated, his Gordon Rider 10 Year Running Art Tribute Book, and his Edamame Ninjas ashcan, as well as comics, buttons, prints and T-shirts, at his online store.